so, what’s the story behind this photo?

before the marine corps air station el toro in southern california was completely torn down and forgotten, something called the “legacy project” happened where several professional photographers documented the deterioration and demise of this abandoned base. while they were doing this, they also took a ‘great picture’ by turning one of the old military jet hangers into a gigantic camera where they made a single black and white photograph—by far the largest ever produced.

as a part of this “project”, they held seminars for local photographers. on two different saturdays, after a brief session and overview of the Legacy Project, i had the unique opportunity to go out into the abandoned buildings (those that were left) and explore with my camera in areas of the base where no visitors had been allowed before. (trust me on this, i tried… ask the irvine PD)

and so i was able to spend a few hours doing what is referred to as urbex photography. (urban exploration photography) watch a slideshow of some other images i took that day at the bottom of this page.

the rest of the base had already been turned into a recreational area with a ‘balloon ride’, an event area and an area used by a recycling and composting company. this is important because you can see the top of the orange ballon in the background of this photo.

when we were leaving one of the abandoned buildings, a worker at the recycling plant happened to be riding by on an old bicycle with his orange vest, mask over his face (6 years before covid-19) and hardhat right in front of a HUGE mulch pile…with the big orange ‘balloon’ lurking over the horizon. i wish i could say i had spent hours setting up the angle to capture this exact moment, but i didn’t. i was just in the right place in the right time and saw a photo — so i clicked the shutter and the moment moved on.

to me, the more i look at this photo, the more endearing it becomes. maybe because of many fond family memories going to air shows at the base before it was ultimately abandoned. maybe because it reminds me of the time i was able to spend photographing in the abandoned buildings. maybe it’s just goofy enough and doesn’t even try to answer any important questions, and that’s OK too. hopefully it made you smile, too. 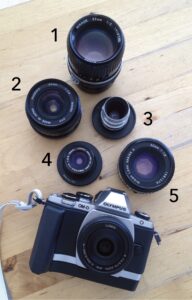 for my photographer friends, here’s the equipment i took with me (click for larger image). for years, i’ve been fascinated by the ability to adapt vintage lenses to digital cameras (in this case, my Olympus OM-D E-M10). the unique and imperfect charater of these lenses is wonderful to explore. here are a couple of the lenses i had with me on this photo shoot.